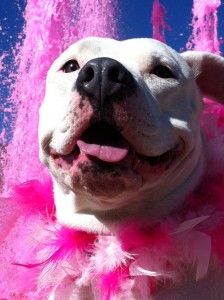 Most everyone knows that October is Breast Cancer Awareness Month, but many people do not realize that dogs can get breast cancer too. Breast cancer in dogs is known as mammary cancer, and it is the most common cancer in female dogs between the ages of five and ten years; especially those that are not spayed.

Mammary tumors are thought to be caused partially by fluctuating hormone levels in females that have not been spayed. Often times the main sign of mammary cancer in dogs is a painless lump or mass, which can be irregular in shape, but there may be a bloody or ulcerous discharge from the nipple as well. Similar to human breast cancer, mammary tumors in dogs can range in size, and are either malignant or benign. If malignant and diagnosed early, surgery is performed to remove the tumor and surrounding tissue. Removal is extremely important as malignant tumors can grow quickly, and once they begin to grow, the cancerous cells can spread to other parts of the body. This fact alone stresses the importance of having your dog examined by your veterinarian as soon as possible! Mammary tumors that are caught early CAN be treated successfully.

Treating a malignant tumor is similar to the treatment of breast cancer in humans. Dogs will have just the tumor removed or the entire mammary tissue, along with lymph nodes and adequate margins of normal tissue. The amount of tissue that will be removed depends on the size and location of the tumor. Removing a small tumor with a rim of normal tissue is called a lumpectomy, and removal of the entire mammary gland is a mastectomy. A complete unilateral mastectomy is the removal of all five mammary glands on one side of the body, and additionally the inguinal lymph nodes, (groin area) are often included in a unilateral mastectomy. A specimen is then submitted to a pathologist for a tissue diagnosis to determine the prognosis. 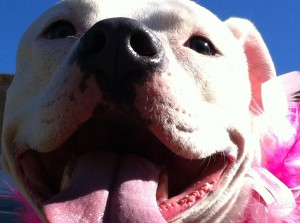 I can’t stress enough the importance of giving your dog an all over body massage, at least once a month, to check for lumps, bumps and any other bodily changes. I’ll say it again, “Mammary tumors that are caught early CAN be treated successfully.”

Be your pet’s health advocate and help them live a long and happy life! xoxo ~Zo