“It is always the simple things that change our lives, and these things never happen when you are looking for them to happen. Life will reveal answers at the pace life wishes to do so.” -Donald Miller

It’s hard to believe it’s almost fall, and I feel like I’ve spent most of the summer on auto pilot. It’s been a time of moving one step forward, then two steps back, and I’ve struggled for the past few weeks, unable to post anything that I’ve written, understanding completely what my friend Erin meant when she told me it would be a year of firsts. It has indeed.

A few weeks ago, I made a decision to give up the trail for a while. Choosing instead to walk the sidewalks through the neighborhood. I made this decision partly because the stars are still out when I leave in the morning, which makes for a very dark trail, and partly because I grew weary from running interference for the battle between my memory and emotions. This morning though proved that you can run, but you can’t hide.

With the house in site, I turned the final corner. Small crab apples crunched beneath my feet, and I completely forgot about the sunrise as I marveled at the moon, hanging low and still glowing brightly against a beautiful lavender backdrop, while it’s much smaller neighbor, Venus, was fading with the morning light. I was completely absorbed, but not enough to miss the familiar hiss of the sprinkler. The sound that I’ve heard all summer, was suddenly a jolt to the old memory bank, and in that moment it became more to me than a means to water the grass. There was never a time that Cain didn’t pass by a sprinkler without stopping to take a drink. His drinks always became a game, and it never mattered what kind of sprinkler it was; he always tried to stop the flow of water to the point I thought he would drown. A drink always turned into a time to play. For a dog that hated to swim (he couldn’t, he sank like a rock!) he reveled in the joy of a sprinkler. First for thirst; always for fun. I’ll jog your memory here of summers long ago, and backyard sprinklers. You know what I’m talking about! It was a 6am smile, and an innocent joy, that sent me running through the cool mist without a care! 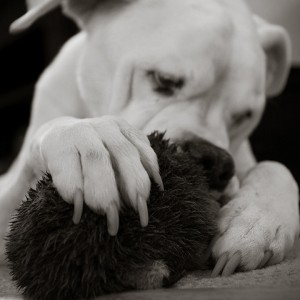 Sometimes it’s the simplest of things that stir our minds, gently reminding us to start each day with a smile. Mine poked through the early morning fog of my mind, and gently prodded a memory I had tucked safely away of a bulldog and child’s play.