Why are there so many songs about rainbows, and what’s on the other side?*

I was half way through my early morning walk with Pirate, when it began. Just a few drops here and there. Small spitting sounds so random that I didn’t think much of it, but as we walked farther from home, the tiny sounds became a soft pitter-patter, falling steadier through the canopy of trees. I love to listen to rain and had become so absorbed with its rhythmic beat that by the time we came out from underneath the trees, it was raining heavily, and I decided we should turn around. We were just far enough away from home, that it made no sense to run!

I sat on the patio after I got home and stared for a moment at the chimes, hanging silent as the rain fell all around. I closed my eyes and wished for a sign from Cain. My mind wandered for a bit as I thought of people who have told me about their dreams and how they are “visited” by their animal friends. I’m still waiting for one of those dreams. I haven’t had the benefit of a good night’s sleep for several months, and on the rare occasions that I do, the sleep is so deep that I suppose it’s possible a dream could go unremembered. I sat in the rain perplexed and continued to wish for a sign. As I was about ready to go in the house, I glanced up at the chimes one more time, and was thrilled at what I saw. Beyond them, in the soft grayness of the 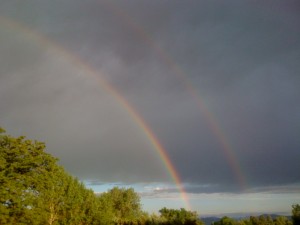 morning, a double rainbow was beginning to emerge!

Who said that every wish would be heard and answered when wished on the morning star?…*

Throughout the day, I thought of the rainbows and my wish. The rainy morning had given way to a beautiful, sunny day and for those that slept in, they missed a special gift.

Or so I thought…

Almost 12 hours later, the day ended just as it began. Maybe not so exciting to some, but a beautiful moment to me as I sat on the patio watching the sky that once again shared its space with the beginning of a double rainbow, only this time it was slightly different. As the rain filled the air with its beautiful song, soft pings from the chimes joined in for a few brief seconds. 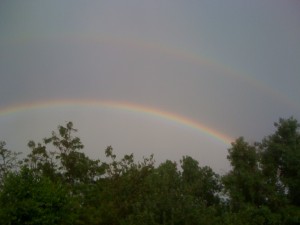 Dreams may come, or maybe they won’t, and rainbows won’t always be double; but today in a beautiful, rainy moment, I found my rainbow connection.