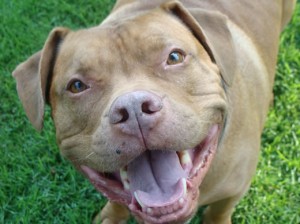 It’s Throwback Thursday, and today’s post is in honor of a very special dog named Petey.

Canine Cancer Tops the List of Funded Research, was a post I shared in 2013 about research being funded by the American Kennel Club Canine Health Foundation. The University of Georgia (UGA) College of Veterinary Medicine was the recipient of a $119,000 grant to test a newly developed experimental drug to treat dogs with naturally-occurring brain tumors, following partial surgical removal of those tumors. The goal of the research – to help translate new brain cancer therapies to humans by assessing results in dogs with similar diseases. According to the researchers, these types of tumors in dogs, known as spontaneous gliomas, are very similar to human malignant brain tumors, and both tend to grow back rapidly. The poor prognosis for dogs with gliomas is similar to human patients and researchers hoped the novel treatment being tested would slow down tumor growth.

An initial pilot program was also funded by UGA College of Veterinary Medicine, the Winship Cancer Institute and Dana Foundation grant money received by Hadjipanayis, as well as the Boo Radley Foundation and in 2011, Petey a seven year old pit bull became the first dog enrolled in a trial at UGA.

It was the summer of 2011. Alex Frame and his dog Petey had just come back from a walk when Petey had a seizure. “It was kind of a hot day and he was drinking water,” said Alex. “At first, I thought he was choking on the water, and he fell over and had a seizure.” Then a week later, Petey had another seizure. The Frames took Petey to the University of Georgia’s School of Veterinary Medicine where neurologist Dr. Simon Platt ordered an MRI of Petey’s brain.

The results from the MRI were not good…Petey had a very large brain tumor and the outlook was poor. If the Frames did nothing he would only have a few weeks to live, but even the most aggressive treatment would probably only buy him a few months.

The following is reposted from

The UGA College of Veterinary Medicine Veterinary Teaching Hospital, and shares how Petey became the first dog enrolled in the trial at UGA.

One Success at a Time: For Petey’s Sake

When the UGA Veterinary Teaching Hospital’s Neurology and Neurosurgery service saw Petey, a 7-year-old Pit Bull, for the first time in early September 2011, things were looking grim. He had recently started to have seizures and mentation changes. The news grew even worse after an MRI showed the cause: Petey had a brain tumor. 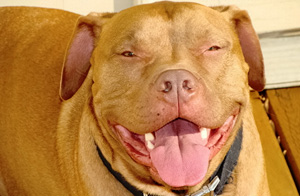 Following an evaluation, neurologist Dr. Simon Platt and resident Dr. Courtenay Freeman realized Petey would be an ideal candidate for a clinical trial being conducted in collaboration with Emory University and funded by the Boo Radley Foundation. The clinical trial is investigating delivery of a medication (Cetuximab) by an infusion method called convection-enhanced delivery (CED) after surgical removal of most of the tumor. This same treatment may be effective for humans with brain tumors.

Petey’s owner, Alexander Frame, consented to the clinical trial, and on Sept. 15, 2011, Petey underwent surgery to remove a significant portion of the large tumor. Immediately following surgery, Petey received a single dose of Cetuximab through CED catheters that were inserted and attached to external pumps to deliver the medicine. The medication was infused into the brain to target residual tumor cells.

A follow-up MRI performed six weeks after surgery showed marked reduction in tumor size and continued presence of medication in his brain. By then, Petey had returned to normal and had not had any more seizures.

A follow-up MRI about four months after surgery showed further reduction in the size of the tumor, said Dr. Platt. Now, more than a year after surgery, Petey remains seizure-free.

“Petey is doing quite well! He’s back to being his old self, and to look at him you’d never know what he’s been through!” his owner, Alexander Frame, told us in August 2012. “I can say that we are very thankful for having Petey with us an entire year after his surgery!”

The Neurology and Neurosurgery service and Emory University recently received a large grant from the AKC Canine Health Foundation for continuation of this study, said Dr. Platt. To refer a patient to the service for consideration of enrollment in the trial, contact the UGA Veterinary Teaching Hospital at hospital@uga.edu or 706.542.3221 (main VTH number).

Petey lost his battle against brain cancer on March 3, 2014. His participation in this clinical trial gave Petey and his owners more than two additional years together, and offer the hope that one day humans who suffer from gliomas may also have more time with their loved ones. Thank you, Petey. ❤