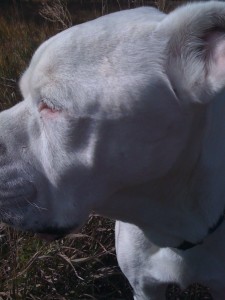 Today marked 4 weeks since I said goodbye to Cain. I spent the night before preparing myself for the flood of emotions that frequent me with each passing day. Wednesday remains the hump in the middle, but Thursday has become my new Monday, now the hardest day of the week for me to get through.

I had prepared myself to spend a portion of the day at my computer conveying my feelings in print, but three things happened that changed my focus on the day. Early this morning I asked Cain to send me a sign. I actually pleaded as I thought of a funny thing that happened yesterday, involving the song Chain of Fools, which I’ll save for a later post. It wasn’t until later in the afternoon when I took Bear and Sadie outside that the chimes in my backyard began to ring. No breeze was present as the soft music sounded through the backyard. I stopped in my tracks as Bear raced around wildly and Sadie paced back and forth through the snow. A smile came to my lips as I searched for the slightest rustle among the bushes that sat so still.

The second sign came later in the evening when I received an email from CSU regarding a story about Cain that I wrote a couple of weeks ago which will now be one of the feature stories on their website. Music to my heart, if not to my ears.

The third and final sign was a wonderful song I found while surfing the internet. A song by John Shipe titled Pit Bull Blues, which captures the true spirit of pit bulls and the bully breed. It chased away my tears and brought a smile to my face.

Am I searching for answers? I’m not sure. I only know that while I search, I find happiness in unexpected places. I continue to honor Cain and spread his message. I make new friends that never before existed.

I’m certain there will be more signs…