Bear and Cain: A Special Bond 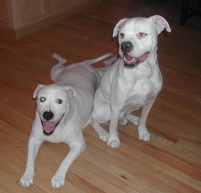 “Piglet sidled up to Pooh from behind. “Pooh,” he whispered.
“Yes Piglet?”
“Nothing,” said Piglet, taking Pooh’s paw, “I just wanted to be sure of you.” -Winnie the Pooh quote

To know Bear is to love Bear and to know Bear and Cain, was to witness a special bond between two friends. Like all relationships, it wasn’t without its ups and downs.

From the moment Bear came into our lives, she made it known from the beginning that Cain would be her ears to the world. Just as his eyes were always on me, so were her eyes on him. She watched his every move, learned from his every reaction and always stayed close by his side, something he didn’t always appreciate but tolerated most of the time. She looked up to him like an older brother and teased him like a younger sister. 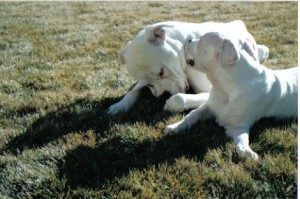 She loved to steal toys from Cain, and always slept with him. It was as if she couldn’t get close enough. He was her pillow, her playmate and her trusted safety. They fought over food and Cain was pretty stingy with his toys, but she was never one to give up and always waited for him to leave either unattended. A practice that Cain was wise to, as he always kept a close eye on her ready to defend the only two things he wouldn’t share with her.

I’m not sure if Cain ever knew that Bear couldn’t hear, or if he just put up with her oddities, but I do know he was the best friend to a dog in need that thought the world of him.

In 2003, Ken K wrote “Bulldogs” about Bear and Cain and the special relationship that they shared. He is generously donating all proceeds from sales of the song to Wishcuit™ to aid animal rescue organizations.

Check it out here – Bulldogs by Ken K