“A person who has never owned a dog has missed a wonderful part of life.” -Bob Barker

Just some thoughts about Cain… 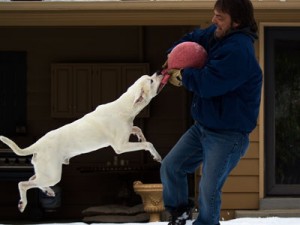 Ask anyone who visits my house, or has known me for some time and they all know to expect a fair amount of dog slobber upon entering my front door.  As I mentioned earlier, Cain has a very short tongue, that coupled with a large set of jowls make for a more than slobbery welcome. He has the most obnoxious habit of wiping his mouth all over anyone that comes in contact with him and only listens for a moment when you tell him to stop! My friend, Patty, showed up one day this summer wearing a towel around her waist.  For a moment I forgot that we don’t have a pool and didn’t think twice of the towel.  Ah, Cain…I quit apologizing  for you a long time ago!

Cain was born with the whitest coat, which I tend to wear as frequently as he does, has an under bite that won’t allow him to pick food out of his dish, a hoarse bark that would make any intruder laugh, a “hopping” run, similiar to a pony prancing, thus the nickname “pony boy” and skin so pink I have dubbed him “Pink Romeo”. He is one big dose of personality with a little goofiness thrown in for good measure. My dad calls him “cartoon dog” and I’ve started sketching little stick figure drawings in the likeness of him. He thinks tug of war is great, and loves to hold onto an object and play “airplane”.  He thinks he’s tough and tries to prove himself to other dogs when we go for a walk, but underneath that bulldog exterior lies the heart of a lamb.  He is the poster boy for bully breeds, if only they could get a fair shake.   Cain knows if I put on high heels that a walk isn’t in order, but if I put on jeans and even look at my tennis shoes all bets are off! 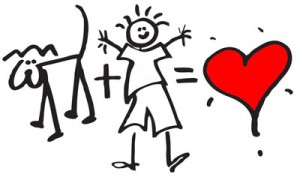 He is my best friend and though I struggle to find the hidden message tucked away with this cancer, I refuse to let it steal the time we have together now.