A New Picture and Unexpected News

We’re greeted by snow upon our return from Utah. Ugh! Crazy Colorado weather. First item on the agenda, another x-ray for Cain. Angel Canyon was beautiful, but cell service sketchy, and I need to have a clear conversation with my vet. I suspect that aspiration pneumonia has returned and don’t want to waste any time getting Cain on medication if that is the case.

I don’t remember exactly when all of his problems began, but suffice it to say it’s not been an easy road for Cain. He has attained celebrity status at our veterinarian’s office due to many strange ailments throughout his life and he’s baffled his doctors and specialists alike. I see no reason that today will be any different.

Over the course of time, I’ve had the opportunity to work with many of the veterinarians at Deer Creek Animal Hospital. Today we’re seeing Dr. Lane and he explains to me that the last x-ray seemed blurred and that a new picture should be taken. Not a problem, as I said we’ve been through this many times.

Deer Creek Animal Hospital is always a busy place, and the doctors and staff exceptional. We arrive and Cain is greeted like the office celebrity that he is. I can’t say that he enjoys it though, and I must say I would rather he be known for something other than the illnesses that are so much a part of his life. We are there long enough to get a new picture and renew his standing order of prescriptions. With smiles and a wave good bye we’re out the door for now. 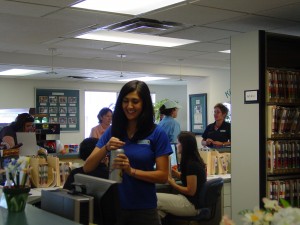 A few days later on Tuesday, I’m given unexpected news.  Dr. Lane calls to let me know that the x-ray taken last Thursday shows a mass in Cain’s left lung lobe.  Not pneumonia as has usually been the case.  The severity of it doesn’t sink in with me until Dr. Lane says, “I’m sorry,” and and the words “a possible tumor”. From this point forward I don’t really hear anything else he has to say, funny how tears can dull the rest of your senses.