I’ve mentioned in past posts about the signs that I receive when the chimes in my backyard sing to me. Signs that come on days when I least expect them, bringing comfort from out of nowhere. Chimes that hang in a spot where gale force winds have difficulty making them ring. Chimes that seem to pick and choose when the time is right, and try as I might, I can’t find any other reason for their song. They sometimes ring uncontrollably when I stand beneath them, and I like to think they are signs from Cain.

Among these signs, there are others. I used to sing “Chain of Fools” to Cain, but instead of singing the word “chain” I changed the words to Cain, Cain, Cain. I have to admit, they are also the only words to this song that I know! On a morning in December, as I was heading out the door to run errands, I realized the television had been left on. I thought for a moment about leaving it on, then thought against it and ran back inside. To my delight, at that very moment, Aretha Franklin was on The View singing Chain of Fools! 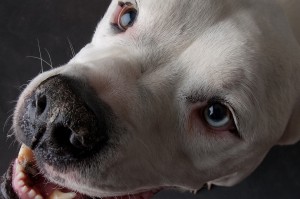 There was the long road trip to Best Friends. My first road trip without Cain and so tough; the memories scattered with every passing mile. My heart was elated when I reached the cottage late that night and even more so when I began reading the guest book journal. That first journal entry written by a guest who had adopted a dog named Mils was all it took. Mils had one blue eye and one brown eye.

Cain was standing outside the studio the other night, waiting in the same spot he always did to go for a walk. His head was tilted with that “are you ready yet” look. It was just a dream, but my first that I’ve had where I could clearly see him. Though that’s all I can remember, I was elated for this “bit” of his presence. 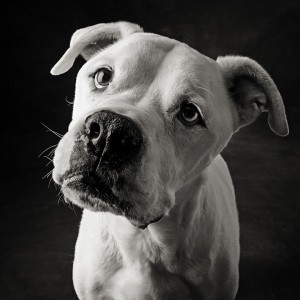 Among the signs that I have received, there is one that stands our far more than the others. It has been the most compelling and came from my friend Linda, who went to see a medium in Austin a few days before Thanksgiving. The medium, who Linda had never met, had come highly recommended and though I don’t remember what Linda was hoping to gain from the experience, I do know what I gained. Linda left me a message later that evening and mentioned that she did not get what she was looking for out of the session, however the medium told her that a large, white dog, who had recently passed away, wanted Linda to let his mom know that he was okay!

Call me crazy if you will. I’ll just call them signs.:)